This is already fairly well documented in the https://jax.readthedocs.io/en/latest/notebooks/autodiff_cookbook.html but here it is with a moderately complex example that is not drawn from machine learning and some timings. The advantages of JAX for this particular example are:

As you will see below the accelleration versus plain NumPy code is about a factor of 500!

The Hessian matrix is the matrix of second derivatives of a function of multiple variables:

where is a function of the variables . Since the matrix is symetric there is elements of Hessian to compute. Where a finite-difference method is used to compute the Hessian and is large, the computation can become prohibitetively expensive.

Uses of the Hessian matrix

Most frequently cited use of the Hessian is in optimisation in Netwon-type methods (see https://en.wikipedia.org/wiki/Hessian_matrix#Applications). The expense of computing it however means Quasi-Netwon methods are often used, where the Hessian is estimated rather than computed. Much more efficient Hessian matrix computation makes true Netwon methods tractable for a wide range of problems1.

Another application is calculation of the https://en.wikipedia.org/wiki/Fisher_information and the Cramér–Rao bound by calculating the Hessian of negative log-likelihod. This in turn allows estimation of variance of parameters when using maximum likelihood.

As an example I am using a maximum likelihood calculation of fitting a simple model to two-dimensional raster observations (i.e., a monochromatic image).

The model2 is a two dimensional Gaussian:

The Python code is straightforward:

Very often the nest step would be to assume that observational uncertainty is normally distributed. This has a deep computational advantage3 but is however often not really the case as the prelevance of various attempts to clean the observed data before it is put into maximum likelihood analysis shows.

For this example I’ll instead assume that the uncertainty is distributed with the Cauchy distribution. The wider tails of this distribution means a maximum likelihood solution will be far less affected by a few outlier points.

The Python is simple:

I will use a simulated data set instead of an observation: a image with a Gaussian source in the middle and normally distributed noise: 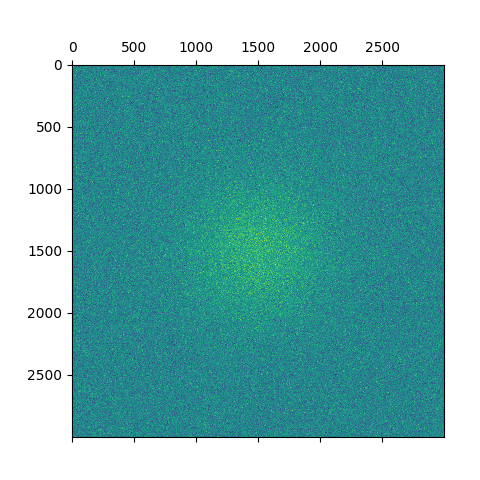 Putting it together and applying JAX

Applying JAX to this non-trivial NumPy is extremely simple. It consists of :

Overal the number of changes is very small and it is quite practical to maintain a code-base which can be switched between numpy and JAX without modifications.

The main part of the program looks like this:

The measurement of timings was done as follows:

Running this Intel CPU (no GPU) I get following timings for 10 runs using timeit:

So impressively there is a reduction in run-time! Note that this is a fairly large problem where the JIT costs are well amortized – the performance would not be this good for scattered small one-off problems. The improvement in performance can broken down as a gain due to automatic-differentiation and gain due to fusion and compilation using XLA.

How to check on exceptions in a Python async task python

What do I need to know about Python's GIL? python